The X-Men are dead! At least that’s what the world thinks — but Marvel’s mightiest mutants are secretly alive and well in the Australian Outback! How long will the X-Men’s self-imposed exile last when the Brood and the mutant-exploiting nation of Genosha come calling? Meanwhile, the New Mutants battle Freedom Force as they deal with Doug Ramsey’s shocking death, and X-Factor befriends Apocalypse’s Celestial ship and faces Infectia! But as all three teams fight the Evolutionary War, Limbo’s demons begin to pursue a sinister agenda — on Earth! A spark has been lit — and if the X-Men aren’t careful, the flames will fan into an all-out inferno!
See More See Less 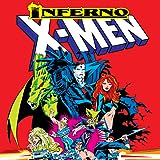 X-Men: Inferno
Mr. Sinister's Marauders attack the X-Men while a horde of N'astirh's demons prey upon the helpless, horrified populace of New York City. And when Madelyne Pryor, wife of Cyclops, becomes the Goblin Queen...all Hell breaks loose.
Your use of Marvel's Digital Comics Shop signifies your agreement to the Marvel Digital Comics License Agreement and Terms of Use, the Marvel.com Terms and Conditions and Privacy Policy.