Swords and sorcery, mutant style! Finding themselves in the middle of a barbarian nightmare, can the X-Men, Avengers and Spider-Man restore the world? Things are no less mystical for the X-Men and Alpha Flight when the trickster god Loki offers a gift to the people of Earth — but, big surprise, it comes with a price! And blade in hand, Nightcrawler swashbuckles his way through an other-dimensional solo adventure! Enough fantasy for you? How about sci-fi, courtesy of Lockheed the Space Dragon and the time-tossed future Sentinel known as Nimrod? And for fans of good, old-fashioned super heroics, Power Pack meets Wolverine — and the Juggernaut's back in town!
See More See Less 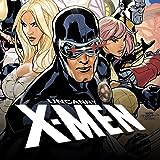