Collects X-Force #12-13 & #17-20. Using his assembled mutant-haters as his pawns, Bastion has begun to put his malicious plans into action - weaponizing the Legacy virus, infecting mutants, causing them to self-destruct, and causing mortal damage to all those around them. As X-Force follows Bastion's trail, attempting to stop the carnage he has set into motion, Cyclops learns the location of what could be mutantkind's last hope - will he force X-Force to abandon their allies to seek Hope out? 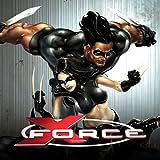 X-Force (2008-2012)
Cyclops has assembled a team of mutant warriors to do the things the X-Men cannot. X-Force, led by Wolverine, is tasked with taking down the big threats behind the scenes...permanently.
Your use of Marvel's Digital Comics Shop signifies your agreement to the Marvel Digital Comics License Agreement and Terms of Use, the Marvel.com Terms and Conditions and Privacy Policy.