The Hell on Earth War begins! The various Lords of Hell battle for dominance in a vicious, mystical war triggered by the seven billionth soul born on Earth, and only X-Factor can prevent the entire world from going up in flames! But as X-Factor struggles to stop the Lords of Hell from tearing the Earth apart, familiar faces will return - the first of whom is Strong Guy! And he has a bone to pick with his former teammates. This is the beginning of the end for X-Factor as you know it..
See More See Less 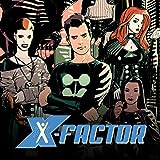 X-Factor (2005-2013)
X-Factor is an investigative mutant agency led by Madrox the Multiple Man. Drawn together in the heart of District X, this rag-tag band of heroes has a lot of answers to find, and fast!
Your use of Marvel's Digital Comics Shop signifies your agreement to the Marvel Digital Comics License Agreement and Terms of Use, the Marvel.com Terms and Conditions and Privacy Policy.