Wolverine vs. The Marvel Universe

Wolverine vs. The Marvel Universe
4.1
(11 ratings)

Wolverine takes on all comers in a collection of his classic brawls with Marvel's finest! Sparks fly as Adamantium claws strike Captain America's shield! Wolverine and Daredevil battle over Bushwhacker! Spider-Man's world is forever changed in an espionage thriller! Wolverine renews rivalries with a gray Hulk; has a nightmarish showdown with Venom; and tackles Avengers, New Warriors and more — but his mighty melee with Thor will be legendary! And in an incredible tale, Logan faces the entire Marvel Universe when a deadly plague transforms everyone — human and superhuman — into savage, cannibal predators. Who will make a stand against the endless slaughter? One word: SNIKT!
See More See Less 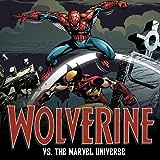 Wolverine vs. The Marvel Universe
Collects Captain America Annual #8, Daredevil (1964) #249, Spider-Man vs. Wolverine #1, Incredible Hulk (1968) #340, Wolverine (1988) 134, Wolverine vs. Thor #1-3, Marvel Universe vs. Wolverine #1-4 and material from Marvel Comics Presents (1988) #117-122. Wolverine takes on all comers in a collection of his classic brawls with Marvel's finest! Sparks fly as Adamantium claws strike Captain Amer
Your use of Marvel's Digital Comics Shop signifies your agreement to the Marvel Digital Comics License Agreement and Terms of Use, the Marvel.com Terms and Conditions and Privacy Policy.