Return with us again to the early days of the all-new, all-different X-Men for all-new solo adventures of Wolverine and Kitty Pryde! Logan goes undercover as the mysterious "Patch" to visit an old enemy posing as a good guy...but the eye sees all! Then, when one of Madrox's duplicates goes on the run, Kitty decides to help him escape from his creator. Logan sides with the original Madrox...but if he thinks he can stop Kitty from speaking her mind, he doesn't know teen girls very well! Next, see what happens when those dastardly Skrulls invade the pages of Wolverine First Class in a story featuring CAPTAIN MARVEL. Plus: Kitty squares off against Wolverine in her toughest test yet!
See More See Less 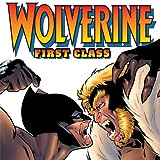 Wolverine: First Class
Professor X pairs up Kitty Pryde with Logan for a mision and neither of them are happy about it. But unless they learn to work together, neither of them will come back from their first mission together alive!
Your use of Marvel's Digital Comics Shop signifies your agreement to the Marvel Digital Comics License Agreement and Terms of Use, the Marvel.com Terms and Conditions and Privacy Policy.