1966: S.H.I.E.L.D. sends secret agent Ran Shen to collect two Nazi scientists with the key to winning the Cold War. But the Soviets want the scientists as well, and have unleashed their most dangerous operative: the Winter Soldier, aka the brainwashed and presumed-dead partner of Captain America - Bucky Barnes! His mission: acquire the scientists by any means necessary...or kill them. The only things in the Winter Soldier's way are an elite Hydra squad run by Chancellor Cassandra and Madam Worm...and his own returning memories!
See More See Less 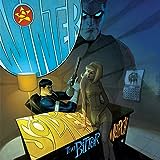 Winter Soldier: The Bitter March
1966: With Nick Fury missing, and presumed dead, global espionage agency S.H.I.E.L.D. sends secret agent Ran Shen to collect two Nazi scientists with the key to defining who wins the Cold War. But the Americans are not the only ones who want the high value scientists.
Your use of Marvel's Digital Comics Shop signifies your agreement to the Marvel Digital Comics License Agreement and Terms of Use, the Marvel.com Terms and Conditions and Privacy Policy.