X-Force exists to tackle the problems that ordinary X-Men can't or won't confront -- with extreme prejudice. But as the killing begins to take its toll, a less existential crisis faces the team: a new Brotherhood of Evil Mutants -- led by Wolverine's twisted son, Daken, and specifically designed to dismantle X-Force...and then to kidnap Genesis, the young clone of Apocalypse, from Wolverine's Jean Grey School and fulfill his destiny to rise as a mutant despot!
See More See Less 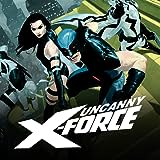 Uncanny X-Force (2010-2012)
THE APOCALYPSE SOLUTION PART 1 To hold back a new Age of Apocalypse, Wolverine and Archangel bring together Fantomex, Deadpool, and Psylocke to form The Uncanny X-Force!
Your use of Marvel's Digital Comics Shop signifies your agreement to the Marvel Digital Comics License Agreement and Terms of Use, the Marvel.com Terms and Conditions and Privacy Policy.