In THE TEMPEST, the death of one of their own leaves the remaining X-Men struggling to deal with the loss. And even before a moment of silence can pass, the mysterious Mr. Sinister arrives, intent on giving the X-Men a lot more to mourn! In CRY WOLF, Gambit's back, but where's he been - and what does he want? The Fenris twins threaten to expose the Ragin' Cajun's past sins - and they are legion - unless he obeys them. But with Rogue on the other side, to whom will Remy finally lend his loyalty? And what decision does Rogue make that will affect her budding relationship with Bobby Drake, Iceman? And in THE MOST DANGEROUS GAME, mutants convicted of capital crimes are being released on an island where contestants hunt them down. Longshot has survived longest, and the X-Men are sent to rescue him - until they become part of the game themselves! With one of their teammates a captive on the island of Krakoa, the malevolent media mogul called Mojo demands the X-Men return Longshot to his headquarters or Angel will soon have a harp to go with his wings!
See More See Less 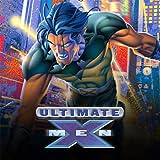 Ultimate X-Men
Magneto leads a squadron of Sentinels on Washington and only the X-Men have a chance to stop him.
Your use of Marvel's Digital Comics Shop signifies your agreement to the Marvel Digital Comics License Agreement and Terms of Use, the Marvel.com Terms and Conditions and Privacy Policy.