Spider-Man and his amazing friends, Iceman and the Human Torch, team up to help the newly powered Rick Jones deal with the crazy changes and responsibilities that come with...power. But what side of the coin is Rick Jones on? Is this the birth of a new hero? Or the birth of an ultimate...enemy? Plus, it's the return of Spider-Woman! And guess who she totally makes out with in this issue! What? Yeah, you heard me!
See More See Less 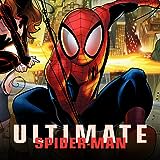 Ultimate Comics Spider-Man (2009-2012)
Death of Spider-Man Prelude! Peter Parker's super hero training continues! Who can Spidey expect to be the instructor for his next lesson this time? Find out here!
Your use of Marvel's Digital Comics Shop signifies your agreement to the Marvel Digital Comics License Agreement and Terms of Use, the Marvel.com Terms and Conditions and Privacy Policy.