Still on the lam through the timestream, the Thunderbolts go medieval on King Arthur and his court! But as the Ghost gets ready to make his move, Fixer discovers a terrible secret! Meanwhile, Songbird escapes for an island vacation, where a mad scientist sets his sights on her — but he ain't the only one mad about it! Then: It had to happen — Thunderbolts vs. Thunderbolts! Years ago, the Thunderbolts were formed to protect a planet devoid of heroes — but they were villains in disguise! Now, as the modern-day 'Bolts come crashing into their earliest days, they'll make a decision that could destroy the Marvel Universe — or save it! Will Zemo's legacy of evil destroy our present, or can the Thunderbolts pull the world back from oblivion?
See More See Less 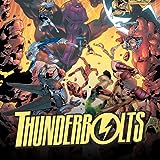 Thunderbolts (2006-2012)
Former villains turned heroes, the Thunderbolts are a team looking to right the wrongs of the world while finding redemption for themselves.
Your use of Marvel's Digital Comics Shop signifies your agreement to the Marvel Digital Comics License Agreement and Terms of Use, the Marvel.com Terms and Conditions and Privacy Policy.