It's the God of Thunder vs. the Mad Titan, and the stakes are higher than ever as writer Dan Jurgens introduces perilous new threats to both Asgard and Earth! Thanos has gathered artifacts that threaten Earth's very existence, and he's got the all-powerful Mangog at his side! For all his godly strength, can even Thor prevail against the might of two such powerful cosmic figures? Plus: Thor, Odin and the Scarlet Witch battle Enrakt the Enchanter in another dimension, while Loki gets up to more of his usual mischief! It's hammer-tossing, thunderous action just the way you like it!
See More See Less 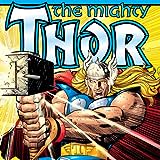 Thor (1998-2004)
Standoff Part 1 (of 3) In war-torn Slovakia, a group of troubled citizens pray to the Thunder God for help and he provides it in the form of a divine task force. The Pentagon doesn't take too kindly to this and sends Iron Man to stop the Odinson!
Your use of Marvel's Digital Comics Shop signifies your agreement to the Marvel Digital Comics License Agreement and Terms of Use, the Marvel.com Terms and Conditions and Privacy Policy.