It’s Thor as you’ve never seen him when Eisner and Harvey Award-nominated writer Roger Langridge and artist Chris Samnee re-imagine the God of Thunder! Thrill as Thor battles raging robots the size of cities and fights side-by-side with Iron Man for the first time! Gasp as he tames the mightiest sea creatures and tests his might against the Sub-Mariner! Swoon as he rescues damsels in distress from the vilest villains! Plus: When mischievous Loki’s machinations throw Thor and a World War II-era Captain America into King Arthur’s court, it’s a time-twisting tale of Camelot craziness that neither Avenger will ever forget!
See More See Less 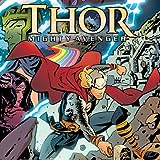 Thor: The Mighty Avenger
He's banished, he's mad, and he wants to fight. Thrill as he battles robots the size of cities! Gasp as he tames the mightiest sea creatures! Swoon as he rescues damsels from the vilest villains! It's Thor as you've never seen him!
Your use of Marvel's Digital Comics Shop signifies your agreement to the Marvel Digital Comics License Agreement and Terms of Use, the Marvel.com Terms and Conditions and Privacy Policy.