It's 1967 - and Andy Clark, Dennis Daniels, Pig Meachum, Jimmy Rubino and the rest of the 23rd Infantry Brigade (Mechanized) are on the Ho Chi Minh Trail for the holidays. Meanwhile, back in the World, Sen. Robert Kennedy has an important day of his own. New soldiers enter the war, and old ones leave it - and there are too many bad ways to leave a war. Plus: The battle lines get even blurrier as enemies display their humanity, and soldiers show their darker sides. Includes rarely seen stories from Marvel's black-and-white magazines.
See More See Less 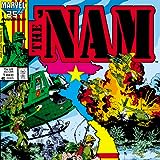 The 'Nam (1986-1990)
Collects The 'Nam #1-10. Don't worry about choosing sides, because this far into the heart of darkness, things get pretty gray. Follow Private Ed Marks and his fellow soldiers through a jungle of blood, lies, betrayal and valor. It's the war that defined a generation, where the heroes may not be super, but they're all too human.
Your use of Marvel's Digital Comics Shop signifies your agreement to the Marvel Digital Comics License Agreement and Terms of Use, the Marvel.com Terms and Conditions and Privacy Policy.