Flash Thompson, the Secret Avenger known as Venom, is back in town - but will his first run-in with the Superior Spider-Man be friendly, or will Flash sense something perilous about Peter Parker's presence? And as Otto Octavius takes another big step in his life as Peter Parker, could a big part of Flash's life be coming to a close? Will he be Venom no more? As Cardiac returns, MJ faces her fears, and a new Goblin is born, the one question everyone will be asking is, "Who is the Superior Venom?!" And after half a century, don't miss one of the most cringe-worthy moments in all of Spidey-history! Guest-starring the Avengers! Plus: Blackout wants to re-establish his reputation by killing the Superior Spider-Man - and to do so, he targets Aunt May!
See More See Less 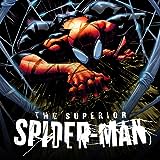 Superior Spider-Man
Peter Parker is gone. The new Amazing Spider-Man has arrived, and he is better in every single way. Smarter, stronger...Superior. And he'll prove it, both to himself and the world.
Your use of Marvel's Digital Comics Shop signifies your agreement to the Marvel Digital Comics License Agreement and Terms of Use, the Marvel.com Terms and Conditions and Privacy Policy.