Her name is May "Mayday" Parker, and she recently learned her father was the original Spider-Man. The good news is that she's having the time of her life as she hones the amazing spider-like abilities she inherited from him. The bad news is that some of her roughest, toughest battles lie ahead - against the likes of Ladyhawk, the Kingpin of Crime, Mr. Nobody, Crazy Eight...and her own parents?!
See More See Less 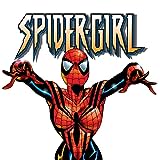