She-Hulk: Planet Without A Hulk

Now that the Illuminati have shot the Hulk into space, who's going to fight all of his bad guys? Enter She-Hulk: Agent of S.H.I.E.L.D.! Spinning out of events from Civil War and Planet Hulk, the new director of S.H.I.E.L.D. is shipping She-Hulk off to Hulk-related hotspots around the globe - where she'll be taking on villains from A-Z! Or, in this case, from the Abomination to Zzzax! That's right, gamma-fans, it's the Emerald Amazon in her most action-packed adventure ever! Plus: "Everything You Ever Wanted to Know About Awesome Andy but Were Afraid to Ask." Ever wonder how the Mad Thinker's Awesome Android became Awesome Andy? It's the origin you never expected - complete with a bombastic battle against the Mighty Thor! And an ending that'll knock your block off!
See More See Less 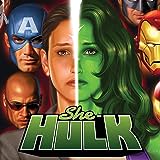 She-Hulk (2005-2009)
She-Hulk deals with the bizarre legal troubles of the Marvel Universe. There are strange twists, exciting adventures, and lots of surprise guests!
Your use of Marvel's Digital Comics Shop signifies your agreement to the Marvel Digital Comics License Agreement and Terms of Use, the Marvel.com Terms and Conditions and Privacy Policy.