The invasion has started, and no one in the MU is safe, not even the First Family of Comicdom! Aware that some of the Earth's most advanced technology and weaponry is housed in the Baxter Building, the Skrulls have neutralized the building - by transporting it and its inhabitants straight to the Negative Zone! With one member of the Fantastic Four M.I.A. and another "replaced," it's up to the remaining family members - not to mention Franklin and Val - to get back to our dimension, Skrulls or no Skrulls. But are any of our heroes who they think they are? Plus: two classic stories of skrull trickery from the Fantastic Four's past.
See More See Less 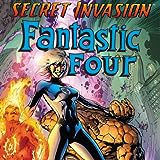 Secret Invasion: Fantastic Four
The Skrulls have neutralized the Baxter Building--by transporting it and its inhabitants straight to the Negative Zone! It's up to Marvel's Finest Family to get back to our dimension. But are any of our heroes who they think they are?
Your use of Marvel's Digital Comics Shop signifies your agreement to the Marvel Digital Comics License Agreement and Terms of Use, the Marvel.com Terms and Conditions and Privacy Policy.