Marvel's short-lived superstar fought enemies both infamous and obscure, but it took his death to unveil the story of his life! It's demons, depowerment and drama when the Defenders discover the true secret of Omega and his mysterious charge! Plus, the death of a super-villain who, so far, is still dead! When was the last time you saw THAT? Guest-starring Spider-Man (if you look closely enough)!
See More See Less 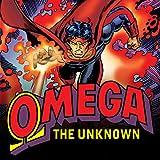 Omega: The Unknown (1976-1977)
Introducing the story of James-Michael Starling, a shy but intelligent boy with a dark secret! Every night, he is tortured by nightmares of battling an android race in the future! But little does he know that his life is about to change forever…
Your use of Marvel's Digital Comics Shop signifies your agreement to the Marvel Digital Comics License Agreement and Terms of Use, the Marvel.com Terms and Conditions and Privacy Policy.