He’s not done with heroics just yet! Once he was the legendary hero called Star-Lord, leader of the Guardians of the Galaxy. Now, decades later, Peter Quill has undertaken a mysterious quest, and its shocking goal will finally be revealed. He has reached the Baxter Building — but with a hidden weapon almost in his grasp, a stunning revelation turns everything on its head! Plus: The Guardians face their final mission — but what fate awaits them? And what is the secret message Quill wishes he could forget? Galactus has arrived, and now the only thing standing between the World-Devourer and Earth’s destruction is Peter Quill! Earth is in major trouble.
See More See Less 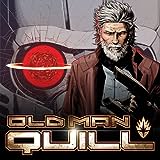 Old Man Quill (2019)
Collects Old Man Quill #1-6. Peter Quill finally grew up. He used to be Star-Lord, but it's been some time since he's gone by that name. Taking over for his father as the emperor of Spartax, Quill put a life of spacefaring adventure behind him for one of leadership and responsibility. But things didn't go as planned. Decades have passed, and Peter is haunted by tragedy. Down and out, his existe
Your use of Marvel's Digital Comics Shop signifies your agreement to the Marvel Digital Comics License Agreement and Terms of Use, the Marvel.com Terms and Conditions and Privacy Policy.