The New Mutants return to the scene of Cypher's death, only to confront a familiar evil reanimated into a terrifying new form of horror! Now, trapped on an island consumed by a super virus, the New Mutants fall one by one - and begin to change. Only Cypher and Warlock remain, but can they stop the Animator's virulent mutation before it engulfs the whole world?
See More See Less 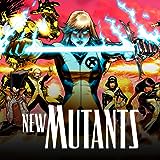 New Mutants (2009-2011)
RETURN OF LEGION PART 1 Cannonball, Dani Moonstar, Karma, Sunspot, Magma and Magik have been gathered once more, but can they stand against one of the most powerful X-Villains of all time? Legion is back!
Your use of Marvel's Digital Comics Shop signifies your agreement to the Marvel Digital Comics License Agreement and Terms of Use, the Marvel.com Terms and Conditions and Privacy Policy.