INFINITY TIE-IN! Who is the secret member of the Illuminati that many of the members don't know about? And how does Black Bolt, mute monarch of the Inhumans, lie to his teammates? As the cold war between Wakanda and Atlantis heats up into a full-scale conflict, casualties begin to pile up - and an Illuminati member is forced to make a hard choice. But when an Inhuman learns of the Illuminati's plans, everything falls apart. And as Thanos' forces invade Earth, the Illuminati take to the front lines - and the House of Black Bolt cracks! How is Maximus the Mad involved, and what secret desires does Thanos harbor? As the battle for Earth continues, the Builders arrive - what an awful time for the Illuminati to face another incursion!
See More See Less 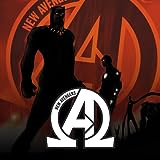 New Avengers (2013-2015)
To prevent a collision of universes, the Illuminati must assemble NOW! Led by the Black Panther, the most powerful and brilliant team in the Marvel Universe is up against an infinite legion of parallel realities!
Your use of Marvel's Digital Comics Shop signifies your agreement to the Marvel Digital Comics License Agreement and Terms of Use, the Marvel.com Terms and Conditions and Privacy Policy.