The secret history of the man behind Moon Knight's mask! Marc Spector was born in Chicago - but where was his alter ego Steven Grant born? A story of birth, death and rebirth digs deep into Spector's past -and redefines the history of Moon Knight as you know it! Trapped outside of reality, his survival depends on answers -but Spector is plagued by nothing but questions! Is Moon Knight stronger alone, or more vulnerable? Where has he really been all this time? Where was a man like Marc Spector forged? And where will he face his final battle? The answers are here!
See More See Less 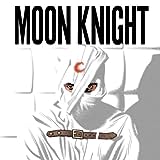 Moon Knight (2016-2017)
The book you'd be insane to miss! Marc Spector (a.k.a. Moon Knight/Jake Lockley/Steven Grant) has been fighting criminals and keeping New York City safe for years...or has he? When he wakes up in an insane asylum with no powers and a lifetime's worth of medical records, his whole identity (identities) are called into question. Something is wrong, but is that something Marc Spector himself? Jeff Le
Your use of Marvel's Digital Comics Shop signifies your agreement to the Marvel Digital Comics License Agreement and Terms of Use, the Marvel.com Terms and Conditions and Privacy Policy.