Luke Cage continues his pursuit of a murderer who’s using disease to kill Harlem’s wealthiest residents. But years of knock-down, drag-out brawls have left him less than unbreakable, and he’s forced to face the very real possibility that living a long life with his family may mean sacrificing his work as a super hero. Either way, he can’t retire yet, because the Everyman killer has just found a new target: Danny Rand, owner of Rand Enterprises…and the IMMORTAL IRON FIST!
A DOUBLE-SIZED Marvel Digital Original you don't want to miss!
See More See Less

Other Ways to Read 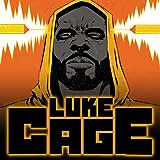 Luke Cage - Marvel Digital Original (2018)
Collects Luke Cage MDO Digital Comic #1-3. With Harlem in the grips of an unprecedented heat wave, the people look to their hero—the unbreakable man, Luke Cage! But the heat wave turns out to be the least of Harlem’s worries. Someone has their sights set on the city’s 1%, and the rich and powerful are dropping dead from mysterious illnesses. It’s up to Luke Cage to stop the Everyman Kil
Your use of Marvel's Digital Comics Shop signifies your agreement to the Marvel Digital Comics License Agreement and Terms of Use, the Marvel.com Terms and Conditions and Privacy Policy.