An all-new adventure set in the movie world of IRON MAN and IRON MAN 2! When Tony Stark announced "I am Iron Man" at the end of blockbuster Hollywood mega-smash, his life changed forever. When IRON MAN 2 opens, it's months later and the world is totally different. What happened during that time? How did Tony Stark put a new chapter in the history books? And how did Iron Man break and rewrite all the rules? Find out in this OFFICIAL in-movie-continuity story!
See More See Less 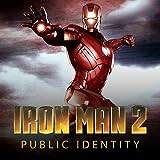 Iron Man 2: Public Identity
Tony Stark has announced to the world that he is indeed Iron Man. How does the public react to this startling revelation?
Your use of Marvel's Digital Comics Shop signifies your agreement to the Marvel Digital Comics License Agreement and Terms of Use, the Marvel.com Terms and Conditions and Privacy Policy.