Daniel Rand finds the path to K'un-Lun, and there he spent a decade training under its immortal inhabitants. After years of ceaseless tutelage, he became an unmatched master of martial arts and spiritual control; armed with the shattering power of the iron fist, he left immortality behind to set out into the Western world and avenge his parents' deaths. Packed with wall-to-wall kung-fu action, Iron Fist runs a gauntlet through the Kara-Kai death cult and ninja adversaries, and into mystic dimensions where the battle must be fought with mind and spirit. But Iron Fist's saga not only follows Daniel Rand's quest for vengeance - it also introduces Marvel mainstays Colleen Wing and Misty Knight!
See More See Less 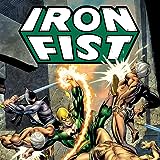 Iron Fist (1975-1977)
The saga of Iron Fist begins here! Marvel's mystical Kung Fu crime fighter takes center stage in his own ongoing series.
Your use of Marvel's Digital Comics Shop signifies your agreement to the Marvel Digital Comics License Agreement and Terms of Use, the Marvel.com Terms and Conditions and Privacy Policy.