All his life, the Hulk has wanted to be left alone - but now, he's got a big, bad family to keep up with! After the events of WORLD WAR HULKS, Hulk is joined by his son from "Planet Hulk," Skaar; his daughter from an alternate future, Lyra; the cousin he's known and loved for ages, She-Hulk; and his best friend, Rick Jones, now in the gamma-charged form of A-Bomb. Oh, and don't forget his first wife and longtime love, Betty Banner - transformed into the ragingly embittered Red She-Hulk. They'd better stick together no matter how uncomfortable this new arrangement may be for all concerned, because one more addition to the family is making his way across the galaxy: the world-shattering Hiro-Kala - twin brother to Skaar, son to Hulk and unknown to either. But not for long!
See More See Less 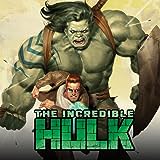 Incredible Hulk (2009-2011)
Collects Incredible Hulk (1999) #601-605, Dark Reign: The List - Hulk. The Hulk is gone, transformed back to mild-mannered Bruce Banner - seemingly forever. But Banner knows the Hulk well enough to realize he never stays buried long. And while the rest of the world breathes a sigh of relief, Banner knows he must prepare - for the day when the monster returns. Traveling to a deserted corner of A
Your use of Marvel's Digital Comics Shop signifies your agreement to the Marvel Digital Comics License Agreement and Terms of Use, the Marvel.com Terms and Conditions and Privacy Policy.