Incredible Hercules: Smash Of The Titans

Incredible Hercules: Smash Of The Titans

When the Hulk returns to Earth for the senses-shattering events of World War Hulk, we can all guess which puny humans will fight against him. But which of Earth's heroes will fight for the Hulk? Don't miss the shocking revelations as Amadeus Cho, the boy genius who took on Reed Richards on behalf of the Hulk in INCREDIBLE HULK #100, confronts She-Hulk and Doc Samson – and precipitates a gamma-powered smash-fest in the wilds of Jersey! Then, the dust has settled after WORLD WAR HULK and Hercules and Amadeus Cho find themselves outlaws, a situation further inflamed by Cho’s grudge against the super-spy agency S.H.I.E.L.D. and Herc’s feud with his estranged half-brother — Ares, god of war, who isn’t above abusing his new federal clout for the sake of sibling rivalry. It’s Marvel’s mightiest manhunt, guest-starring Wonder Man and the Black Widow. Then, the Greek Goliath gathers the most powerful super-team ever assembled to counter-attack the Skrull gods! Face front, True Believers, and prepare for the pantheon-pounding premiere of...THE GOD SQUAD! All this plus an untold tale pitting Hercules against the Incredible Hulk!
See More See Less 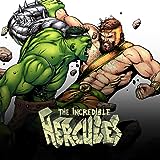