Danny Rand was not the first Immortal Iron Fist... and he won't be the last! The year - 3099. The place - a distant planet first colonized a millennium ago by the People's Republic of China. Now, a humanity oppressed by a totalitarian technological tyrant has just one hope for salvation - the kung-fu freedom-fighting of the Immortal Iron Fist! But his coming is nothing more than a prophecy and a silent prayer... and even if the Iron Fist does arrive, he must first defeat the most powerful weapon the evil robot empire has - Robo Fat-Cobra!
See More See Less 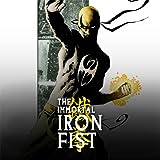 Immortal Iron Fist (2006-2009)
Two words, punks...BATTLE ROYALE! All the losers in the tournament in the Heart of Heaven get a chance to redeem themselves and obtain the ultimate victory...Danny Rand included! But if Danny couldn't win mano a mano, what hope does he have in a no-holds-barred kung-fu free-for-all of violence and carnage? And meanwhile, on Earth, the sinister Xao launches an attack almost a century in the making,
Your use of Marvel's Digital Comics Shop signifies your agreement to the Marvel Digital Comics License Agreement and Terms of Use, the Marvel.com Terms and Conditions and Privacy Policy.