Chronicling the final days of the Green Goliath! Presenting a searing vision of the future in which Bruce Banner, the Incredible Hulk, is the last man on Earth. It's the Hulk's final battle, as "The Last Titan" wrestles his inner-demons in order to discover his place in a dying world - if only he can survive! Plus: The testing of the first Gamma Bomb thrust upon Robert Bruce Banner that which he would come to believe would be his greatest nightmare: his unwilling transformation into the Incredible Hulk. He believed wrong. Now, having been dragged into the future - into a post-holocaust, dystopian world - Bruce Banner discovers that his nightmare has a whole new name: the Maestro. This is a nightmare that only Hulk can end. For he knows that he himself is responsible for the presence of the evil Maestro.
See More See Less 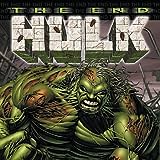 Incredible Hulk: The End
When there's nobody left on the Earth but Bruce Banner, how can Hulk prove he's the strongest one there is?
Your use of Marvel's Digital Comics Shop signifies your agreement to the Marvel Digital Comics License Agreement and Terms of Use, the Marvel.com Terms and Conditions and Privacy Policy.