FEAR ITSELF reaches its hand deep into the heart of the City of Lights! Iron Man races to Paris, France, to encounter one of "the Worthy" waiting there for him. How will the ultimate man of science react to a city turned to stone? Iron Man arms himself for the end of the world in hopes of stopping the Serpent.
See More See Less 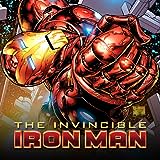 Invincible Iron Man (2008-2012)
IRON MAN! You know you love him! And as the summer's most anticipated movie boot-jets its way into theaters, here's the perfect jumping-on point for new readers and Iron Man fans alike! Tony Stark - Iron Man, billionaire industrialist and director of S.H.I.E.L.D. - faces the most overwhelming challenge of his life. Ezekiel Stane, the son of Tony's late business rival and archenemy Obadiah, has set
Your use of Marvel's Digital Comics Shop signifies your agreement to the Marvel Digital Comics License Agreement and Terms of Use, the Marvel.com Terms and Conditions and Privacy Policy.