The Fantastic Four are being torn apart at their very foundations! Can Ben cope with the secret he's learned about Johnny? Will Sue and Reed lose Franklin and the kids of the Future Foundation, currently in the custody of Jim Hammond? And can what's left of the team stop their headquarters from being shut down by...the Avengers?! When the Thing is accused of a shocking murder, Mr. Fantastic sets out to prove his friend's innocence - but when the new Frightful Four strike, a savage and strategic attack leads to the fall of Reed Richards! And as Wyatt Wingfoot rushes to save a life, Sue Richards heads to Latveria to reclaim her daughter from Dr. Doom! The epic deconstruction of Marvel's First Family continues as ORIGINAL SIN rolls on!
See More See Less 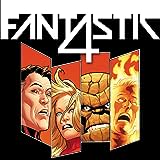