Now operating out of San Francisco, Daredevil continues his partnership with the Black Widow as they confront villains as weird as Haight-Ashbury. The Dark Messiah and Angar the Screamer lead the charge, until Stilt-Man arrives to strut his way across the Golden Gate! There's also a crossover adventure with the Avengers and X-Men, a Spider-Man team-up, and a fight with Kraven the Hunter that turns decidedly cosmic! Enter: Moondragon — who mistakes DD for a thrall of Thanos — and the original Captain Marvel!
See More See Less 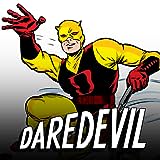