Regrouping after the loss of their leader, Pete Wisdom, X-Force is forced to deal with some bizarre goings-on in California - namely, normal humans suddenly transforming into grotesque monsters! But there's a lot more to this situation than merely morbid mutations - as Cannonball, Warpath, Domino and the rest find out when they encounter international subterfuge in the form of Russian Warborgs sent to kill!
See More See Less 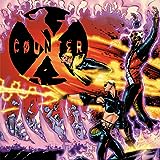 Counter X
Collects X-Force #102-109. Like all mutants, X-Force must face a callous and deadly world -- but now they've been trained for it by Peter Wisdom, one of the most callous and deadly mutants of all! The proactive paranormal platoon faces a city transformed by Cold War mad science and a mutant druglord terrorist, but will their deadliest enemies be Wisdom's long-lost allies? Featuring killer zombi
Your use of Marvel's Digital Comics Shop signifies your agreement to the Marvel Digital Comics License Agreement and Terms of Use, the Marvel.com Terms and Conditions and Privacy Policy.