Cloak And Dagger: Crime And Punishment

Created by the underworld - sworn to destroy it! Cloak and Dagger hit the streets to fight organized crime and super villainy! When they set their sights on the Kingpin, Spider-Man thinks they're going too far, but his webs can't rein them in! Plus: The Punisher's on the prowl, and it's a problem for everybody! Guest-starring the Black Cat, the New Mutants and the Spidey supporting players of yesteryear!
See More See Less 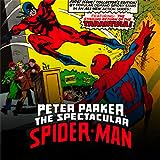 Peter Parker, The Spectacular Spider-Man (1976-1998)
Peter Parker and his clone Ben Reilly join forces in an effort to defeat the Traveler!
Your use of Marvel's Digital Comics Shop signifies your agreement to the Marvel Digital Comics License Agreement and Terms of Use, the Marvel.com Terms and Conditions and Privacy Policy.