It's the return of the New Warriors, drawn by superstar artist Skottie Young (ROCKET RACCOON)! When Night Thrasher strikes a mysterious deal with a reality-TV producer, the New Warriors move out of New York -- and into a very cramped van -- to travel across America, and help small-town residents deal with the roving villains and superhuman threats that the major super-teams are too busy to tackle! But will the Warriors' filmed exploits be uplifting, or just exploitative? And is heartland America ready for big-city super heroics? Find out as the Warriors take on Tiger Shark, the Armadillo, the Super-Apes, the Controller, the Mad Thinker's Intellectual Robots and more -- and unknowingly set the stage for the superhuman Civil War! Plus: the sweeps-week debuts of Microbe and Debrii!
See More See Less 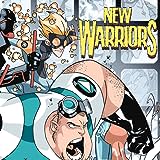 New Warriors (2005)
The New Warriors get their own reality show and take on Tiger Shark, the Armadillo, the Super-Apes, the Controller, the Mad Thinker’s Intellectual Robots and more — and unknowingly set the stage for the superhuman Civil War!
Your use of Marvel's Digital Comics Shop signifies your agreement to the Marvel Digital Comics License Agreement and Terms of Use, the Marvel.com Terms and Conditions and Privacy Policy.