The Royal Couple, King T'Challa and Queen Ororo, embark on a diplomatic tour that will have them spanning the globe - and beyond! Stops include Latveria (Dr. Doom), the Moon (Black Bolt and the Inhumans), Atlantis (Namor the Sub-Mariner) and the Civil War-ravaged United States, for a meeting with none other than the point man for the U.S. government's implementation of the Superhuman Registration Act: Tony Stark, T'Challa's former Avengers teammate. Will the Black Panther and Storm decide to get off the sidelines of the Civil War and get involved?
See More See Less 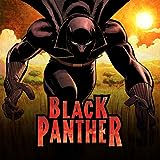 Black Panther (2005-2008)
The Black Panther's origin is retold in a cinematic scope with social satire and all-out action that's sure to excite true believers and the hip hop faithful.
Your use of Marvel's Digital Comics Shop signifies your agreement to the Marvel Digital Comics License Agreement and Terms of Use, the Marvel.com Terms and Conditions and Privacy Policy.