Captain America: Captain Of Nothing

Captain America — wanted for murder! Accused and in custody, Steve Rogers has become a captain of nothing. With no costume, with no shield, and trapped behind bars with a thousand villains and killers who'd like nothing more than to see him dead, Steve fights back — and he can do it all day! But as the Power Elite makes its play, who stands with Cap? A prison riot is the best possible cover to break Steve out of confinement, but what if he doesn't want to go? Steve Rogers might end up a fugitive, but that doesn't mean he'll give up the fight to prove his innocence and bring the true murderer to justice. Not by a long shot! It's time for Cap to try a new tactic!
See More See Less 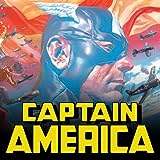 Captain America (2018-)
Collects Captain America (2018) #1-12 and material from Free Comic Book Day 2018 (Avengers/Captain America) #1. Acclaimed BLACK PANTHER scribe Ta-Nehisi Coates takes on the Sentinel of Liberty! For more than 70 years, Captain America has stood in stalwart defense of his country and its people. But in the aftermath of Hydra’s brief takeover of the nation, Cap is a figure of controversy carryin
Your use of Marvel's Digital Comics Shop signifies your agreement to the Marvel Digital Comics License Agreement and Terms of Use, the Marvel.com Terms and Conditions and Privacy Policy.