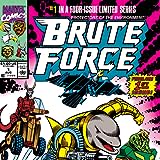 Brute Force (1990)
Collects Brute Force #1-4 and Power Pachyderms #1. Includes fun-packed wildlife fact sheets created by Disney's Animals, Science and Environment! Wreckless the bear! Soar the eagle! Surfstreak the dolphin! Hip Hop the kangaroo! And Lionheart the — you guessed it — lion! They're the cybernetically enhanced protectors of the environment, Brute Force! And they're fighting to save the Earth, wh
Your use of Marvel's Digital Comics Shop signifies your agreement to the Marvel Digital Comics License Agreement and Terms of Use, the Marvel.com Terms and Conditions and Privacy Policy.