In 1973 comics' first African super hero took the headlining slot in an ambitious ongoing series, beginning a 13-issue epic unprecedented in its time. Writer Don McGregor teamed with artists Rich Buckler and Billy Graham to tell "Panther's Rage," a story so huge it ranges across the savannah, into the deepest jungles and up to the snow-topped mountains of Wakanda. Over its course McGregor & Co. would define T'Challa, give full depth and life to the Wakandas and their culture, while pitting the Panther against the murderous Erik Killmonger for control of the kingdom. Not one to rest on his laurels, McGregor then set out to raise the bar once again, sending T'Challa to the American South to investigate the murder of Angela Lynne and its connection to the Klan and the history of the Soul Strangler.
See More See Less 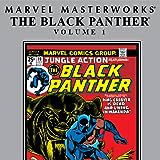 Jungle Action (1973-1976)
Collects Fantastic Four (1961) #52-53, material from Jungle Action (1972) #6-24. In the 1960s, Stan Lee and Jack Kirby created an unprecedented string of classic comic-book heroes. But quite possibly the most iconic of them all was the high-tech king of Wakanda, the Black Panther! When the Panther began his own solo series, Don McGregor strove to meet Lee and Kirby's high standard with "Panther
Your use of Marvel's Digital Comics Shop signifies your agreement to the Marvel Digital Comics License Agreement and Terms of Use, the Marvel.com Terms and Conditions and Privacy Policy.