Black Panther: A Nation Under Our Feet

The full truth of the People's revolution - and the power players supporting it - has been revealed! Now, T'Challa must fight like never before for the fate of his nation - and one of his most trusted allies is back to stand by his side. As the final battle begins, the entirety of Wakanda's glorious history may be their most potent weapon. But even if the People fall, can the monarchy still stand? The pieces are all in position, now it's time for Ta-Nehisi Coates and Brian Stelfreeze to knock over the board as their revitalization of Black Panther continues!
See More See Less 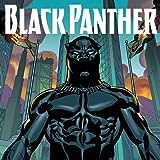 Black Panther (2016-2018)
A new era for the Black Panther starts here! Written by MacArthur Genius and National Book Award winner TA-NEHISI COATES (Between the World and Me) and illustrated by living legend BRIAN STELFREEZE, "A Nation Under Our Feet" is a story about dramatic upheaval in Wakanda and the Black Panther's struggle to do right by his people as their ruler. The indomitable will of Wakanda -- the famed African
Your use of Marvel's Digital Comics Shop signifies your agreement to the Marvel Digital Comics License Agreement and Terms of Use, the Marvel.com Terms and Conditions and Privacy Policy.