Avengers by Jason Aaron: War Of The Vampires

Kingdom of vampires! Transylvania burns as a battle of the bloodsuckers throws the world into chaos! But the mysterious Shadow Colonel and his new Legion of the Unliving have one question on their murderous minds: Where is Dracula? And if the Avengers find him first, will he be friend or foe? Earth's Mightiest Heroes will have to call in an expert — welcome to the Avengers, Blade! But is Ghost Rider about to become a deadly enemy? When the dust settles and a new vampire order is established, who will be the Lord of the Damned? Plus: The Iron Fist of 1,000,000 BC stars in another journey into prehistory! Get to know the primordial woman who was the first to harness the power of the heart of the dragon Shou-Lao!
See More See Less 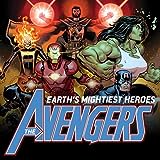 Avengers (2018-)
Collects Avengers (2018) #1-6 and Material From Free Comic Book Day 2018 (Avengers/Captain America). A new era for Earth’s Mightiest Heroes! Steve Rogers. Tony Stark. Thor Odinson. The big three are reunited at last — and just in time to save the world from the 2,000-foot-tall space gods known as the Celestials! Behold the coming of the Final Host! But who will answer the call as a new team
Your use of Marvel's Digital Comics Shop signifies your agreement to the Marvel Digital Comics License Agreement and Terms of Use, the Marvel.com Terms and Conditions and Privacy Policy.