Doctor Doom: Avenger?! The impossible is real! Doom has turned to the light side in a fresh suit of armor as the Infamous Iron Man. And now he is about to take Shell-Head's place in the Avengers -or, to hear Victor tell it, they're joining him! But how will Earth's Mightiest Heroes react to one of its greatest villains joining their ranks?
See More See Less 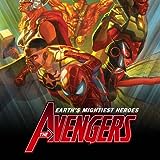 Avengers (2016-2018)
The time has come! Their ranks shattered by Civil War, their spirits weighted down by a toll both personal and spiritual, Earth's Mightiest Heroes must find the resolve to stand united one final time against their greatest foe! Captain America! Thor! The Vision! The Wasp! Spider-Man! Hercules! When the dust settles, not a one of these valiant heroes will make it to the final page alive! This is KA
Your use of Marvel's Digital Comics Shop signifies your agreement to the Marvel Digital Comics License Agreement and Terms of Use, the Marvel.com Terms and Conditions and Privacy Policy.