Prepare yourself for another dramatic dose of monsters from the mind of Jack Kirby and Steve Ditko's strange suspense thrillers from TALES TO ASTONISH! There's more big monster rampages than you can shake a stick at with Trull the Inhuman-a mechanical beast that would make a monster truck shudder- the menace of Moomba, the Creature from Krogarr, the Gorilla-Man, the Abominable Snowman, and the first-ever appearance of Hank Pym, the man who would become Ant-Man! To top it off, there's Steve Ditko's suspenseful shorts that will take you to the farthest reaches of the universe and the darkest depths of the human soul. Each tightly-told tale is a lesson for mankind that will make you think twice before you turn out the light! These strange stories were the mortar in the foundation of the House of Ideas, where Stan Lee and his two greatest collaborators built the synergy and style that would turn the comics' world on its head.
See More See Less 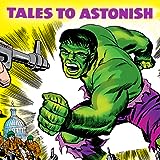 Tales to Astonish (1959-1968)
Collects Tales to Astonish (1959) #1-10. The Marvel Masterworks have brought you stories from the Marvel Age's super-hero heyday and comic books' Golden Age. Now, prepare yourself for the Atlas Era! Throughout the 1950s the comics world sat astride the shoulders of Atlas - a world full of gun-fighting outlaws, romantic heartbreak, gritty battlefields, terrifying horror and visionary science fic
Your use of Marvel's Digital Comics Shop signifies your agreement to the Marvel Digital Comics License Agreement and Terms of Use, the Marvel.com Terms and Conditions and Privacy Policy.