The Marauders return with a vengeance when Chimera leads the deadly squad against the X-Men! Karma discovers an unknown but incredibly powerful telepath is controlling their assailants, and Wolverine leads his team on an investigation that puts their minds and hearts to the ultimate test. When a psychic ambush pits the X-Men against their teammate Northstar, he learns the true meaning of devotion -- as his boyfriend Kyle holds a gun to his head! Northstar's decision in the face of death will lead him to the wedding that the world's been waiting for -- if he can survive a harrowing battle against his teammates and the love of his life! Plus: the classic landmark Marvel moment when Northstar publicly announced that he is gay.
See More See Less 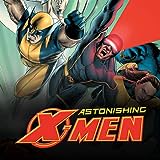 Astonishing X-Men (2004-2013)
Astonishing X-Men takes the style of the X-Men movies, mixes it with the wit of Buffy and holds it together with the classic flavor that made the X-Men famous. This is the perfect comic for new readers, old readers, returning readers and learning readers. It's just that good.
Your use of Marvel's Digital Comics Shop signifies your agreement to the Marvel Digital Comics License Agreement and Terms of Use, the Marvel.com Terms and Conditions and Privacy Policy.