Amazing X-Men: Once and Future Juggernaut

When the Gem of Cyttorak reappears, seeking to create a new avatar, none hear its call more than those who have previously housed the power of the unstoppable Juggernaut: Cain Marko and Colossus! But they aren't the only ones hunting for the Gem. Can the X-Men find it before it's too late? And can Colossus resist the temptation of Cyttorak's power? "Unstoppable" takes on a whole new meaning as Cyttorak's gem is finally located. The Juggernaut rises, and the X-Men fall! Has the Juggernaut returned? Is this the last stand of Colossus? Plus: A death in Storm's family sends the X-Men to Africa! And as AXIS inverts the X-Men, Anole's deepest fears are unleashed on the streets of New York City, and Nightcrawler and Mystique's relationship reaches a boiling point!
See More See Less 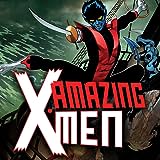 Amazing X-Men (2013-2015)
An AMAZING new era for the X-Men! WOLVERINE, STORM, BEAST, ICEMAN, NORTHSTAR, FIRESTAR and a returning NIGHTCRAWLER fight to protect a future for mutantkind.
Your use of Marvel's Digital Comics Shop signifies your agreement to the Marvel Digital Comics License Agreement and Terms of Use, the Marvel.com Terms and Conditions and Privacy Policy.