Just one chance... That's all Peter Parker has to win back Mary Jane Watson, the love of his life. Tired of playing second fiddle, to Peter's heroic responsibilities as Spider-Man, Mary Jane left him for a new life in Los Angeles. Now, she's back in New York -- for one night only -- and Peter has the chance to make things right. But when Spider-Man becomes embroiled in a battle against the child-abducting menace called the Shade, the opportunity slips from his desperate grasp. Or does it? With Aunt May in tow, Peter heads west for one last try at redemption. In California, the unexpected appearance of Doctor Octopus draws Spider-Man into a grudge match between the tentacled terror and a mysterious upstart armed with Otto Octavius's own mechanical appendages. Caught in the crossfire, Peter faces a gut-wrenching choice: pursuing a normal life with Mary Jane or donning his costume to save innocent civilians at risk. Stood up once again, will Mary Jane turn her back on the hero for good?
See More See Less 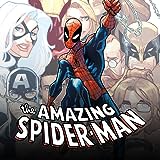 Amazing Spider-Man (1999-2013)
Looking for the one superhero comic you just have to read? You've found it! Amazing Spider-Man is the cornerstone of the Marvel Universe. This is where you'll find all the big-time action, major storylines and iconic Spider-Man magic you'd come to expect from the Wall-Crawler.
Your use of Marvel's Digital Comics Shop signifies your agreement to the Marvel Digital Comics License Agreement and Terms of Use, the Marvel.com Terms and Conditions and Privacy Policy.