Laura Kinney's greatest battle so far has been fought, and won — but at what cost? As she and Gabby attempt to move on with their lives, her predecessor's legacy continues to cast a long shadow. Laura is the Wolverine, but is she ready to meet this reality's new arrival, Old Man Logan? He's stepped out of a dystopian future into our world — and he's about to bring a lot of carnage Laura's way. But when a new CIVIL WAR divides the Marvel Universe, will these past and present Wolverines stand together? Or will they shred each other apart? And when the superhuman conflict puts those dearest to her in harm's way, can Laura remain the hero she's fought so hard to become — or will she finally succumb to her dark destiny?
See More See Less 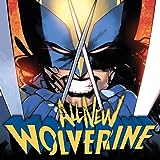 All-New Wolverine (2015-2018)
X-23 was created to be a weapon and for a time, that’s all she was. But with the help of her mentor, Logan- the original Wolverine- she escaped that dark past. Tragically, Logan has fallen, but Laura will continue in his footsteps as a hero.
Your use of Marvel's Digital Comics Shop signifies your agreement to the Marvel Digital Comics License Agreement and Terms of Use, the Marvel.com Terms and Conditions and Privacy Policy.