In one of the most magical realms on Battleworld, Angela and Sera are Witch Hunters — the scourges of King James' England, just as it stood in 1602. But their target now is a new breed of evil: the power-bargaining Faustians! The Faustians have made their deal not with the Devil, but with the ever-seductive Enchantress — and that may be just as deadly. Have your psychic ribbons and lethal weapons at the ready, for the hunt is on! But beware a land where the dead walk, the faerie folk flutter and a ragtag band of ne'er-do-wells perform for your entertainment — that's right, it's the Guardians of the Galaxy, 17th-century style! Plus: Revisit the early dawn of the Marvel Universe in the first issue of Neil Gaiman's original classic 1602!
See More See Less 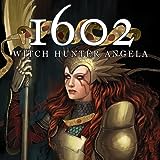 1602: Witch Hunter Angela (2015)
In the altered realms of Battleworld, Angela and Sera are Witch Hunters, the scourges of King James’ England, 1602. In a land beset by magic and monstrosity, they seek a new and seductive evil, not witchbreed, but deal-making Faustians, who bargain with ancient creatures for unnatural power! Moral ambiguity? Fancy allusions? Marguerite making the most of that English degree? Try 1602 Witch Hunte
Your use of Marvel's Digital Comics Shop signifies your agreement to the Marvel Digital Comics License Agreement and Terms of Use, the Marvel.com Terms and Conditions and Privacy Policy.